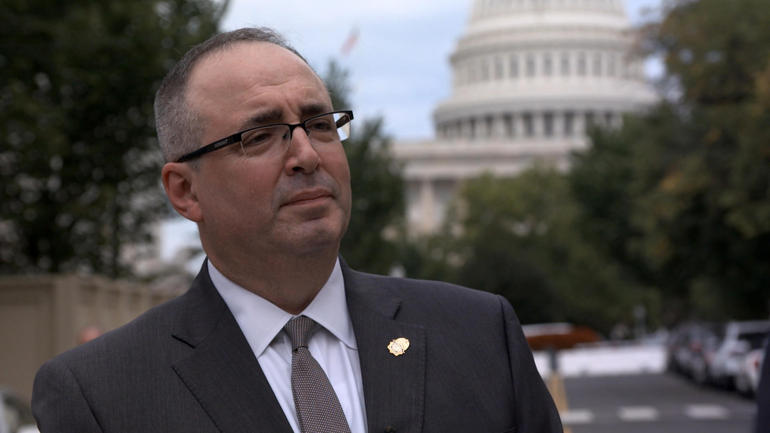 Why has the country’s opioid problem become a national emergency? A high-ranking whistleblower from the DEA explains how the drug industry–and Congress–fueled an epidemic

This week, the broadcast airs Bill Whitaker’s interview with Rannazzisi, a former high-ranking DEA agent who saw the opioid epidemic killing hundreds of thousands of Americans, tried to stop it, and ran into a brick wall — in the form of Congress.

Joe Rannazzisi is not gonna give this fight up…He’s going to pursue this until he gets some satisfaction.”

Whitaker talks about his report “The Whistleblower,” which was a joint investigation with The Washington Post, with 60 Minutes Overtime and explains why Rannazzisi decided to talk publicly.

“Joe Rannazzisi is not gonna give this fight up,” says Whitaker. “He’s like a dog with a bone. He’s going to pursue this until he gets some satisfaction.”

BILL WHITAKER: Okay. Well, Joe, if you would first of all please state your name, so we have it at the top of your interview?

BILL WHITAKER: My story on 60 Minutes this week is about a former DEA agent who saw the opioid epidemic growing, and tried to stop it, and ran into a brick wall in the form of Congress.

JOE RANNAZZISI TO CONGRESS: 16,651 people in 2010 died of opiate overdose, ok? Opiate-associated overdose. This is not a game.

BILL WHITAKER: Are you the most high-level whistleblower to come out of the DEA?

JOE RANNAZZISI: As far as this? Yes. As far as pharmaceutical opioid abuse and the way we’ve handled it? Yeah, I’m pretty much the highest-level person that’s come out.

60 MINUTES OVERTIME: Joe Rannazzisi is in your story called one of the most important whistleblowers ever to be on 60 Minutes. What’s your sense of what drives him?

BILL WHITAKER: He is a no-nonsense principled man. He saw this crisis and wanted to stop it. What he zeroed in on was the distribution of the pills. So he started to put pressure on the distributors. And the distributors pushed back.

JOE RANNAZZISI: This is an industry that allowed millions and millions of drugs to go into bad pharmacies and doctors’ offices, that distributed them out to people who had no legitimate need for those drugs.

BILL WHITAKER: This story was like a continuation of the two previous stories we did on the opioid crisis. That one was personal.

Excerpt from “The Heroin Epidemic“:

BILL WHITAKER: It seems that some investigators with the DEA were aware that these pills were getting out of the pharmacies and into the streets, and they tried to ring the alarm bells. But not only did no one pay attention to them, it seems that members of Congress took steps to try to limit the DEA’s abilities to stop this. And the result was a bill in Congress that actually ended up taking away the most potent tool that the DEA had to go after the distribution of so many drugs.

JOE RANNAZZISI: This bill is going to protect defendants that we have under investigation, that we are investigating. And it restricts or prevents us from filing immediate suspension orders to stop– to stop the hemorrhaging of drugs downstream.

CONGRESSMAN TOM MARINO: It is my understanding that Joe Rannazzisi, a senior DEA official, has publicly accused we sponsors of the bill of –quote supporting criminals –unquote. This offends me immensely.

BILL WHITAKER: You know you have a reputation. And even people who support you tell us that you can be a bit of a hothead. True?

BILL WHITAKER: And this crisis that he saw happening in front of his eyes enraged him.

BILL WHITAKER: “People are dying.” He would say that to us over and over and over again. “People are dying.” So he was trying to figure out what he could do about it. And every time he ran into a roadblock, he got angrier and more forceful. And it depends on who ya talk to what his reputation is. If you talk to his investigators, the people who worked in the field for him, they love him. You talk to some people in Washington– at the DEA– his higher-ups at the DEA or at the Justice Department, certainly in Congress, they think he was too aggressive, to the point of being boorish.

JOE RANNAZZISI: What I needed was support. And it infuriated me that I was over there, trying to explain what my motives were or why I was going after these corporations. And when I went back to the office, and I sat down with my staff, I basically said, “You know, I just got questioned on why we’re doing– why we’re doing what we’re doing. This is– now this is war. We’re going after these people, and we’re not gonna stop.

BILL WHITAKER: He’s not the most diplomatic person you’ve ever come across.

60 MINUTES OVERTIME: No, but he makes a good whistleblower.

BILL WHITAKER: He makes a great whistleblower, and he’s got a reason to be upset.

JOE RANNAZZISI: It just hurts when somebody says, “Well, DEA should be doing more.” DEA was doing everything it could. DEA ran into a wall.

60 MINUTES OVERTIME: Do you think this investigation by 60 Minutes and The Washington Post will make waves?

BILL WHITAKER: I sure hope so. This is a terrible crisis. What I would hope would happen from this story is that Americans get angry.

BILL WHITAKER: Joe Rannazzisi is not gonna give this fight up. He’s like a dog with a bone. He’s going to pursue this until he gets some satisfaction.

CONGRESSMAN TOM MARINO: You know before coming to Congress, I was a prosecutor and an United States Attorney.

BILL WHITAKER: Congressman Marino has been nominated to be the next drug czar. What was your reaction when you heard that?

JOE RANNAZZISI: Total disbelief. Total disbelief. He’s just not qualified to do that job. Besides the fact that he pushed through a bill that’s curtailing the ability of DEA to do their job, I don’t understand how you could look at a congressman who’s done all of this and then decide he would be a great drug czar– to basically set policy for the United States; drug policy for the United States.

BILL WHITAKER: We will soon have a hearing with Congressman Marino. I would think that this would be an issue that will be brought up in his hearings.

JOE RANNAZZISI: The bill was bad. Him being the drug czar is a lot worse.

nextPortugal: Why hardly anyone dies from a drug overdose